The Triton Topaz range of Electric Showers caught my eye as they were an oval shape and neatly facilitated rear entry for the 10mm Electric Cable and 15mm Water Pipe. This enabled the shower unit to be mounted with the Water Pipe completely out of sight which I found appealing. Over the years I had a few variations:

I installed the T100si shown below and used it regularly for many years – until the digital display stopped working. 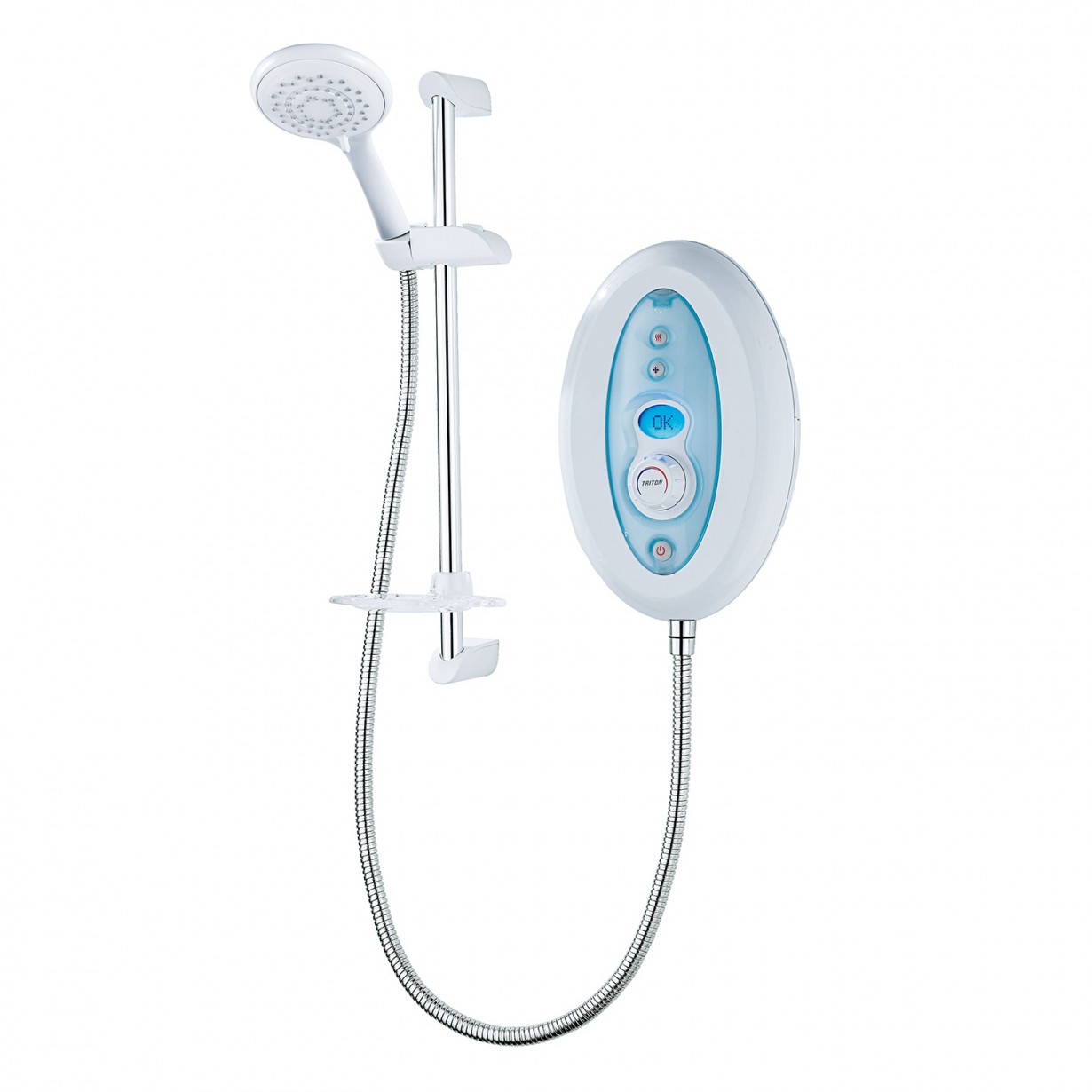 It was subsequently replaced with a Triton Topaz T80si shown below to ensure the digital display did not malfunction. As you can see the T80si is not fitted with a digital display, just an old school dial. 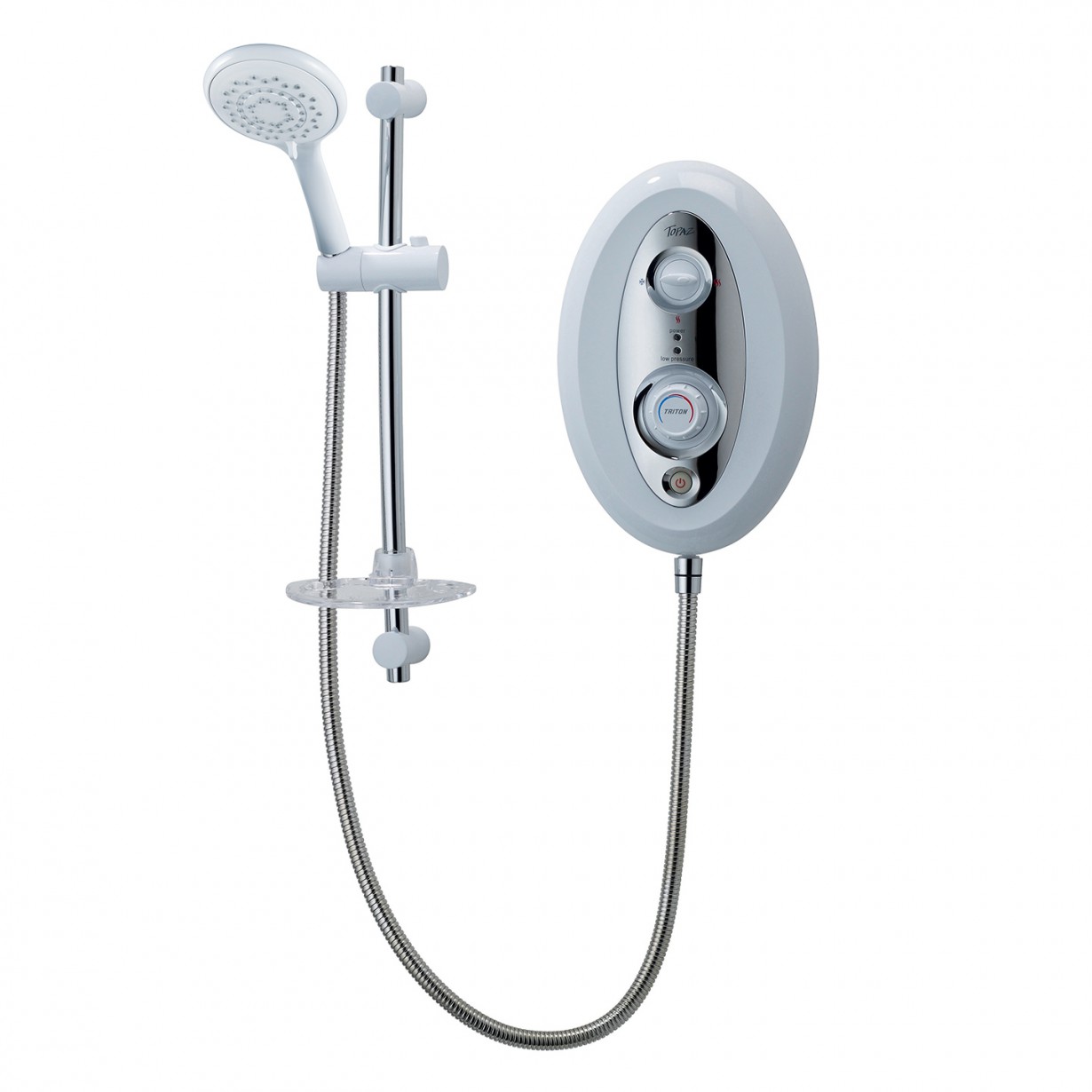 However, despite the difference in controls, the T80si and T100si – occupied exactly the same space on the wall and shared the same casing design hence the change was very straight forward as the 15mm Water Pipe and 10mm Electric cable connections were identically placed.

After a number of years the T80si had significantly reduced in price and when water appeared to be coming from around the hose connection, I simply picked the reduced price unit up from Screwfix and changed it out.

All went extremely well for a further number of years, until last week when the T80si began to produce cold water. However, rather than play about with testing and spare parts, I embarked on a further purchase of a T80si. I browsed and browsed and browsed, only to find that the Triton Topaz range was obsolete – my bubble had finally burst as the best I found were 2 on ebay being sold for spares.

I resigned myself to the fact that I was going to have to upgrade – which did not appear to be straight forward as I really wanted to keep the rear entry feature which appeared to be unique to the Triton Topaz range. I searched and searched for an equivalent but it was like a needle in a haystack.

Long story short – I found the Triton T150+ Thermostatic Electric Shower shown below, which was actually a better fit. 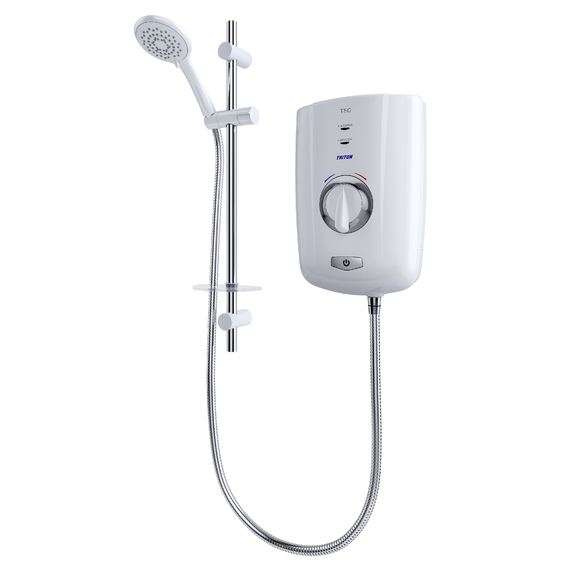 Due to the Oval Shape, although the the Triton Topaz models facilitate rear entry of services, you can see from the below that the mounting screw location on the bottom right could easily interfere with the water pipe embedded in the wall – I recall taking great care in getting the drill to just miss the pipe. 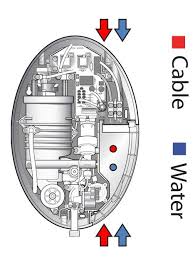 However, in the T150+ Thermostatic, you can see from the below that the services enter the rear in the same way but all mounting screws are to the left, no-where near the pipe entry line, so the risk to damaging the water pipe embedded in the wall is removed. 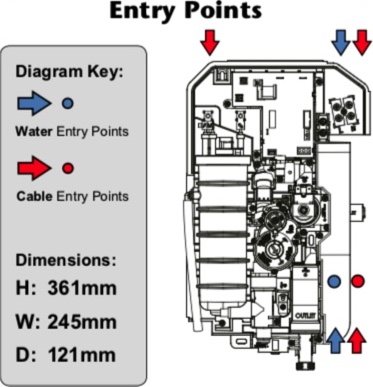 In a nut shell – if you are looking to replace a Triton Topaz T80si or T100si – the Triton T150+ Thermostatic is the one to buy. It comes in 8KW or 9KW models and is approved for use in care homes due to the low resistance controls which keep water temperature accurate to within 1 degree C. As an added bonus, when fitted the T150+ completely covers the holes in the wall left following removal of the T80si. You can get one of these on Amazon.

Amazon.co.uk
Warning – Electric showers are very high power electrical appliances fed from the domestic water main which can result in fatal electric shock and significant water damage if not properly isolated – so please ensure isolation of water and power to the shower is undertaken by a competent person.Dec 2020 update –

Just a note to say thank you everyone it has been really good to be contacted by so many people who this article has helped over the least year and a half. I have been checking and these T150+ Thermostatics are still the only units on Amazon and still represent the best value. This article was initially written just to give you the model number of a shower unit which would be a straight forward replacement for the T80si or T100si. However, having used it for this long I can say hand on heart that not only is it a very straight forward replacement, it is a nice upgrade. Very smooth controls and absolutely no issues with temperature changes even when running the bath. I even make good use of the beep which has proved effective in alerting me to the fact that the bathroom is about to become free and that is pure added value.

Please keep the messages coming if you find this article useful.

Apple HomeKit is without doubt the platform of choice for Home Control and Automation. The frustration is the number of core products which have been delayed in obtaining HomeKit – certification.

Enter Homebridge… for hundreds of the products not yet certified for HomeKit – a Homebridge-plugin has been developed, enabling the products to be controlled from IOS devices, Macs and basically anything running the Home App.